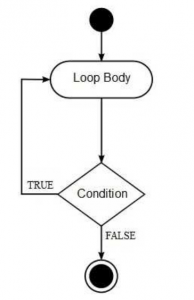 This means the do-while construct has a condition part that decides whether the statements will be executed or not. Also, it has a counter variable to keep the count of number of times the statements are executed. However, this counter variable needs to be modified during iteration within the body of loop. The counter modification statement should be last statement of the body of the loop. The general syntax of while looping statement is as follows:

One may argue why we should use such kind of a loop. The answer is simple. There are certain situations wherein we need it. For example, we want to get a number from user that is greater than 10. And if the number is less than or equal to 10, we should again ask for the number. The code snippet below shows how this can be done using a while loop.

In contrast, we can do this with lesser number of statements using do-while loop as shown in code snippet below.