Constants are those tokens in C language whose value is fixed and does not change during the execution of a program. There are various types of constants in C.

Table -1: Representation of an integer in different number systems

Real Constants
These constants refer to those numbers which contain fractional parts like 12.34. Such numbers are called real or floating point numbers. A real constant can also be expressed in exponential or scientific notation. As an example, 12.34 can also be expressed as 1234E-2. In this form, the real number is expressed in terms of mantissa and exponent. The mantissa is either a real number or an integer and exponent is an integer number. Both can have an optional plus or minus sign. The letter E separating the mantissa and the exponent can be written in lowercase also.

Character Constants
These constants refer to those tokens which contain a single character enclosed within a pair of single quotes like ‘W’. The character may be a letter, number, special character or blank space. As an example, ‘5’ is a character constant while as 5 is an integer constant. Similarly, 5.0 can be treated as real constant.

Character constants are printable characters which are stored in memory as their ASCII (American Standard Code for Information Interchange) code.

String Constants
These constants refer to those tokens which contain a string of characters enclosed within a pair of double quotes. The characters may be letters,  numbers, special characters and blank space. Examples include “Hello World!”, “123”, and so on. It should be noted “123” is a string constant while 123 is integer constant. 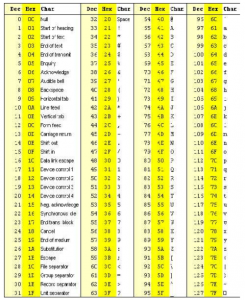 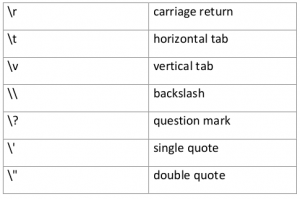