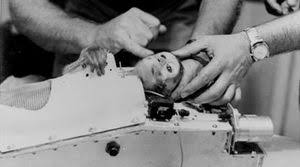 The summer of 1959 was an exciting time for electrical and computer technologies. On June 3rd, President Dwight Eisenhower sent a message to Canadian Prime Minister John Diefenbaker by means of a radio signal bounced off the moon. At the time, this technological tour de force evoked smiles for the absurdity of sending a message across the border by way of the moon. Today, of course, our telephone calls routinely travel up to satellites and back. In that summer of 1959, the space race was under way, and the United States launched half a dozen satellites and sent two monkeys into space. (They returned unharmed.)

In June 1959, the first transistorized portable TV, the Philco Safari, came on the market. It did not sell well, unlike the transistor radios that had appeared five years earlier. The transistor was, for most applications, a great advance over the electron tube, and in 1959 an even more momentous advance had begun: the development of the integrated circuit. Early in the year, Jack Kilby of Texas Instruments had filed a patent for an integrated circuit, and in July, Robert Noyce of Fairchild Semiconductor showed how to make the technology practical in his patent for the planar process of IC manufacture.

Postwar economic growth meant that families were acquiring more and more home appliances, and in the 1950s, these appliances became more sophisticated technologically and more flamboyant stylistically. The backsplash of a stove, for example, might resemble a car’s instrument panel, and a new Sunbeam Mixmaster looked something like a rocket ship. It was in July of 1959 that such consumer goods were displayed for Russian citizens at an exhibition in Moscow, and Vice President Richard Nixon used the appliances as arguments for the superiority of the American system in an impromptu, and soon famous, “kitchen debate” with Soviet Premier Nikita Khrushchev. Nixon said that the appliances eased the burden on the U.S. housewife; Khrushchev replied that in the Soviet Union women were not confined to the stove.

Nuclear power was another technology that, in the summer of 1959, made people optimistic about the future. In the United States, it came to submarines in 1954, allowing them to travel submerged for long periods, and it came to civilian power stations in 1957. In July 1959, the first nuclear-powered merchant ship, the SS Savannah, was launched. In this application, however, the technology proved impractical, and only three other nuclear-powered cargo ships were ever built.

The summer of 1959 saw two important computer advances. One was the development of COBOL, a standard programming-language for business applications. The effort, promoted by Grace Hopper, began in late May and was completed in November. The 1950s and early 1960s was the era of so-called mainframe computers, huge machines that only government agencies, universities or large businesses could afford. A way to make such a machine available to many people simultaneously was time-sharing, in which people used terminals that received the computer’s attention for a split second in sequence. The first public description of a time-sharing system may have been that given by Christopher Strachey at a UNESCO conference in Paris in June 1959, though it took a year or two before such systems were realized.

Finally, it was at the end of the summer of 1959 that the Xerox 914 came on the market. There were already wet-film photocopiers, but the Xerox 914, whose name comes from xeros, Greek for dry, was a more practical device. (The “914” comes from the ability of the machine to copy originals as large as 9 inches by 14 inches.) Soon such machines were ubiquitous in the business world.

communications, space technology, electronics, home appliances, nuclear power, computers, and office machines, the engineers were busy in the summer of ’59.