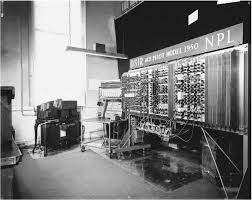 On 19 February 1946 in London, England, computing pioneer and World War II code-breaker Alan Turing delivered the complete design of the Automatic Computing Engine (ACE), a stored-program computer. Turing may be the first to conceive of the electronic computer as a universal machine, with the flexibility to logically manipulate symbols to solve a variety of problems, as opposed to a specific machine built for a specific task.

Born in 1912, Turing had become recognized for his mathematical talents early in life and by his mid-twenties, he had already developed a theoretical device, the Turing machine, that was designed to make mathematical computations. As he imagined, this machine would have had many of the components of a modern computer, including using a tape for memory, a head for reading and writing, a table for defining algorithms, and a register for storing the machine’s state. He developed this concept between 1936 and 1938 at the Institute for Advanced Study in Princeton, New Jersey, while earning a Ph.D. at Princeton University.

During the war, one of his tasks was helping the British design early computers for breaking German code. Unlike his theoretical computer, the British cryptographic machinery was not a stored-program computer and was only meant to perform a specific function.

With the end of the war, Turing joined the National Physical Laboratory (NPL) in London, where he sought to create an electronic stored-program digital computer. His vision was to create a form of artificial intelligence, even suggesting that he desired less to build a practical computer than a model of how the brain functioned. This proposed machine was dubbed the Automatic Computing Engine (ACE) in honor of the early computers developed by another British scientist, Charles Babbage, a century before.

Although the original file describing the machine was destroyed, it appears that the proposal was drafted as early as fall 1945. When published in February, 1946, Turing’s plan offered detailed specifications about how the computer could be built and what it could do. He offered extensive circuit designs, specific hardware units, examples of programs that could be entered into the machine, and an estimated cost.

Turing focused on building a high-speed system that could store programs and information. The ACE was meant to have a high-speed memory comparable to that of the early Macintosh computers.

Turing left the National Physical Laboratory before his initial vision could be executed. In May 1950, a model of the ACE built by a team of researchers at the NPL first ran a program. Running at 1 MHz, it took the rank of the world’s fastest computer for a number of years.

Eventually, thirty computers were built and sold based on the ACE model, which tripled the number of computers that some in the NPL leadership imagined were need in Britain. Its design was also constitutive of the Bendix G15 computer, which some consider the first personal computer.