Complementary to the OSI model is the TCP/IP protocol suite. TCP/IP is not necessarily a direct offshoot, but it’s a progressive step from the standard OSI version of traffic flow. Each layer of the TCP/IP suite maps to one or several layers of the OSI model. The TCP/ IP suite is important for protocol reference as well as aiding in tracking exactly where data is in the traffic flow process.

TCP is known as a connection-oriented protocol because it establishes a connection and verifies that packets sent across that connection make it to their destination. The process starts with what is called a SYN packet. This SYN packet starts the hand- shake process by telling the receiving system that another system wants its attention (via TCP of course). The receiving system then replies to the originating system with a SYN-ACK response. A SYN-ACK response is an acknowledgment response to the original SYN packet. Once the original sender receives the SYN-ACK response, it in turn responds with an ACK packet to verify that it has received the SYN-ACK and is ready to communicate via TCP. Wow! Really, it’s not that complicated.

For example, a SYN packet has a random beginning sequence number that will be sent to the target host. Upon receipt of the SYN packet, the receiving host will respond with a SYN-ACK that has its own randomized sequence number. The ACK response packet from the first host will bump the sequence number up accordingly to signify the order of the packets being transferred. 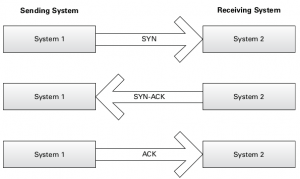 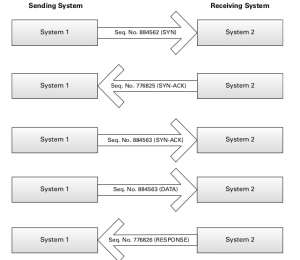 The Rise of Cyberlaw

Penetrating the System
For any query or issue, feel free to discuss on http://discuss.eduguru.in