Most attacks in this category are outside the scope of a book about attacking web applications. One exception to this is attacks that target the web server layer. The web server is intimately tied up with the application that runs on it, and defects within a web server can often be used to attack the application directly, rather than indirectly, by first compromising the underlying host.

Even the simplest of web servers comes with a wealth of configuration options that control its behavior. Historically, many servers have shipped with insecure default options, which present opportunities for attack unless they are explicitly hardened.

Examples of default credentials on some of the most commonly encountered administrative interfaces are shown in Table. 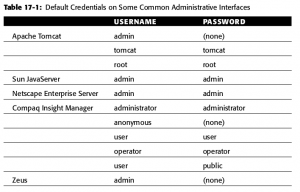 In addition to administrative interfaces on web servers, numerous devices, such as switches, printers, and wireless access points, use web interfaces that have default credentials that may not have been changed. The following resources list default credentials for a large number of different technologies:
■ www.cirt.net/cgi-bin/passwd.pl
■ www.phenoelit.de/dpl/dpl.html

Most web servers ship with a range of default content and functionality that you may be able to leverage to attack either the server itself or the main target application. Here are some examples of default content that may be of interest:
■ Debug and test functionality designed for use by administrators.
■ Sample functionality designed to demonstrate certain common tasks.
■ Powerful functions not intended for public use but unwittingly left accessible.
■ Web server manuals that may contain useful information that is difficult to obtain elsewhere or is specific to the installation itself.

Functionality designed for diagnostic use by administrators is often of great value to an attacker because it may contain useful information about the configuration and runtime state of the server and applications running on it.

Figure 1 shows the default page phpinfo.php , which exists on many Apache installations. This page simply executes the PHP function phpinfo() and returns the output. It contains a wealth of information about the PHP environment, configuration settings, web server modules, and file paths. 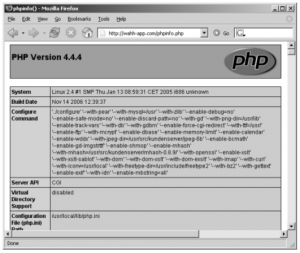 Many servers include by default various sample scripts and pages designed to demonstrate how certain web server functions and APIs can be used. Typically, these are intended to be innocuous and to provide no opportunities for an attacker. However, in practice this has not been the case, for two reasons:
■ Many sample scripts contain security vulnerabilities that could be exploited to perform actions not intended by the scripts’ authors.
■ Many sample scripts actually implement functionality that is of direct use to an attacker.

Some web server software contains powerful functionality that is not intended to be used by the public, but which can be accessed by end users through some means.

One example of powerful default functionality arises in the PL/SQL gateway implemented by Oracle Application Server. This provides an interface whereby web requests are proxied to a back-end Oracle database. Arbitrary parameters can be passed to database procedures using URLs like the following:

This functionality is intended to provide a ready means of converting business logic implemented within a database into a user-friendly web application. However, because an attacker can specify an arbitrary procedure, he can exploit the PL/SQL gateway to access powerful functions within the database. For example, the SYS.OWA_UTIL.CELLSPRINT procedure can be used to execute arbitrary database queries, and thereby retrieve sensitive data:

To prevent attacks of this kind, Oracle introduced a filter known as the PL/SQL Exclusion List. This checks the name of the package being accessed and blocks attempts to access any packages whose names start with the following expressions: 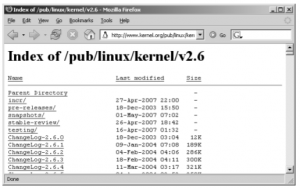 The Web Server as a Proxy

Web servers are sometimes configured to act as forward or reverse HTTP proxy servers. If a server is configured as a forward proxy, then depending on its configuration, it may be possible to leverage the server to perform various attacks as follows:

Securing the configuration of a web server is not inherently a difficult task, and problems typically arise through oversight or lack of awareness. The most important task is to fully understand the documentation for the software you are using and any hardening guides available in relation to it. In terms of generic configuration issues to address, be sure to include all of the following areas:
■ Change any default credentials, including both usernames and passwords if possible. Remove any default accounts that are not required.
■ Block public access to administrative interfaces, either by placing ACLs on the relevant paths within the web root or by firewalling access to nonstandard ports.
■ Remove all default content and functionality that is not strictly required for business purposes. Browse the contents of your web directories to identify any remaining items, and use tools such as Nikto as a secondary check.
■ If any default functionality is retained, harden this as far as possible to disable unnecessary options and behavior.
■ Check all web directories for directory listings. Where possible, disable directory listings in a server-wide configuration. You can also ensure that each directory contains a file such as index.html , which the server is configured to serve by default.
■ Disable all methods other than those used by the application (typically GET and POST ).
■ Ensure that the web server is not configured to run as a proxy. If this functionality is actually required, harden the configuration as far as possible to allow connections only to the specific hosts and ports that may be legitimately accessed. You may also implement network-layer filtering as a secondary measure to control outbound requests originating from the web server.

The HTTP Protocol
For any query or issue, feel free to discuss on http://discuss.eduguru.in