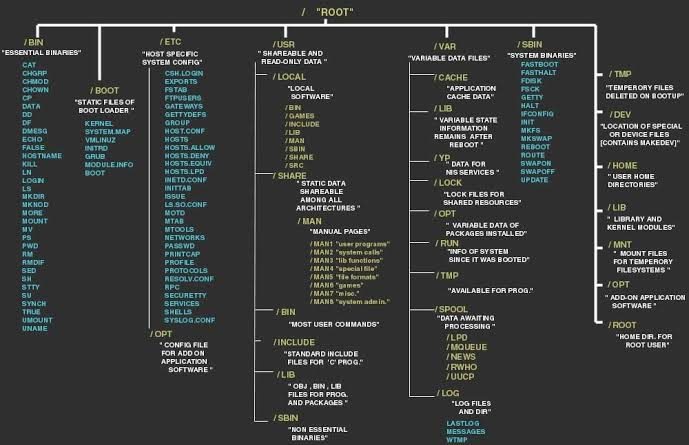 This post takes a look at the most common directories in the Linux file tree. It also shows that on Unix everything is a file.

Many Linux distributions partially follow the Filesystem Hierarchy Standard. The FHS may help make more Unix/Linux file system trees conform better in the future. The FHS is available online at http://www.pathname.com/fhs/ where we read: “The filesystem hierarchy standard has been designed to be used by Unix distribution developers, package developers, and system implementers. However, it is primarily intended to be a reference and is not a tutorial on how to manage a Unix filesystem or directory hierarchy.”

There are some differences in the filesystems between Linux distributions. For help about your machine, enter man hier to find information about the file system hierarchy. This manual will explain the directory structure on your computer. 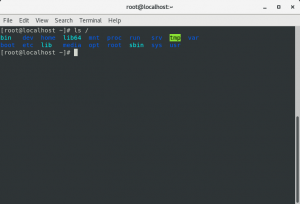 Binaries are files that contain compiled source code (or machine code). Binaries can be executed on the computer. Sometimes binaries are called executables.

In the screenshot below you see common Unix/Linux commands like cat, cp, cpio, date, dd, echo, grep, and so on. 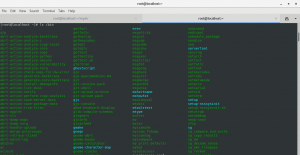 You can find a /bin subdirectory in many other directories. A user named serena could put her own programs in /home/serena/bin.

Some applications, often when installed directly from source will put themselves in /opt. A samba server installation can use /opt/samba/bin to store its binaries.

/sbin contains binaries to configure the operating system. Many of the system binaries require root privilege to perform certain tasks.

Below a screenshot containing system binaries to change the ip address, partition a disk and create an ext4 file system. 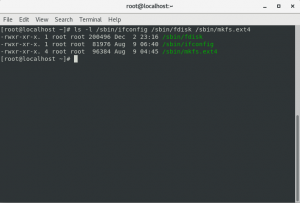 We currently are in a transition between 32-bit and 64-bit systems. Therefore, you may encounter directories named /lib32 and /lib64 which clarify the register size used during compilation time of the libraries. A 64-bit computer may have some 32-bit binaries and libraries for compatibility with legacy applications. This screenshot uses the file utility to demonstrate the difference.

The ELF (Executable and Linkable Format) is used in almost every Unix-like operating system since System V.

The purpose of /opt is to store optional software. In many cases this is software from outside the distribution repository. You may find an empty /opt directory on many systems.

A large package can install all its files in /bin, /lib, /etc subdirectories within /opt/ $packagename/. If for example the package is called wp, then it installs in /opt/wp, putting binaries in /opt/wp/bin and manpages in /opt/wp/man.

The /boot directory contains all files needed to boot the computer. These files don’t change very often. On Linux systems you typically find the /boot/grub directory here. /boot/grub contains /boot/grub/grub.cfg (older systems may still have /boot/grub/grub.conf) which defines the boot menu that is displayed before the kernel starts.

All of the machine-specific configuration files should be located in /etc. Historically /etc stood for etcetera, today people often use the Editable Text Configuration backronym. Many times the name of a configuration files is the same as the application, daemon, or
protocol with .conf added as the extension. 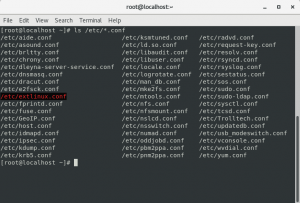 There is much more to be found in /etc.

A lot of Unix/Linux distributions have an /etc/init.d directory that contains scripts to start and stop daemons. This directory could disappear as Linux migrates to systems that replace the old init way of starting all daemons.

The skeleton directory /etc/skel is copied to the home directory of a newly created user. It usually contains hidden files like a .bashrc script.

This directory, which is not mentioned in the FHS, contains a lot of Red Hat Enterprise Linux configuration files. The screenshot
below is the /etc/sysconfig directory from RHELv4u4 with everything installed. 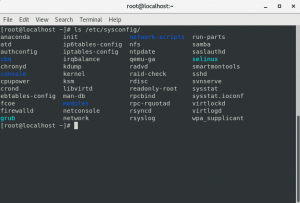 The /etc/sysconfig/harddisks file contains some parameters to tune the hard disks. The file explains itself.

You can see hardware detected by kudzu in /etc/sysconfig/hwconf. Kudzu is software from Red Hat for automatic discovery and configuration of hardware.

The keyboard type and keymap table are set in the /etc/sysconfig/keyboard file. For more console keyboard information, check the manual pages of keymaps(5), dumpkeys(1), loadkeys(1) and the directory /lib/kbd/keymaps/.

working with linux directories
For any query or issue, feel free to discuss on http://discuss.eduguru.in