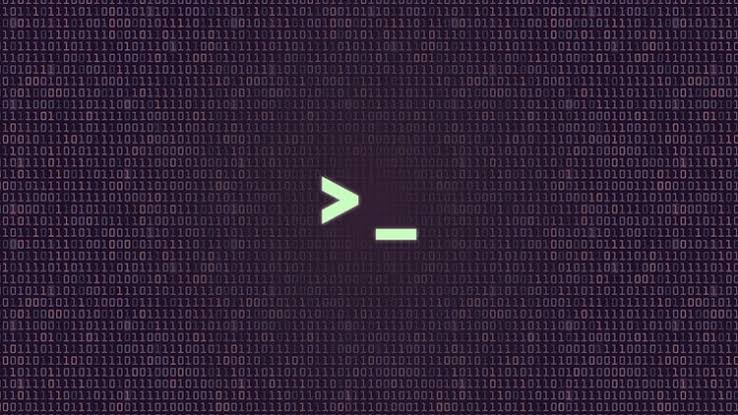 One of the primary features of a shell is to perform a command line scan. When you enter a command at the shell’s command prompt and press the enter key, then the shell will start scanning that line, cutting it up in arguments. While scanning the line, the shell may make many changes to the arguments you typed.

This process is called shell expansion. When the shell has finished scanning and modifying that line, then it will be executed.

Parts that are separated by one or more consecutive white spaces (or tabs) are considered separate arguments, any white space is removed. The first argument is the command to be executed, the other arguments are given to the command. The shell effectively cuts your command into one or more arguments.
This explains why the following four different command lines are the same after shell expansion. 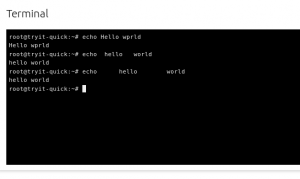 You can prevent the removal of white spaces by quoting the spaces. The contents of the quoted string are considered as one argument. In the screenshot below the echo receives only one argument. 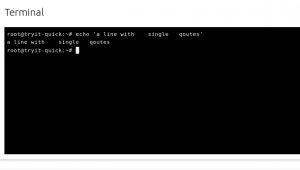 You can also prevent the removal of white spaces by double quoting the spaces. Same as above, echo only receives one argument. 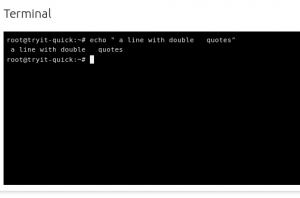 Quoted lines can include special escaped characters recognised by the echo command (when using echo -e). The screenshot below shows how to use \n for a newline and \t for a tab (usually eight white spaces). 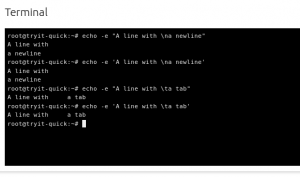 The echo command can generate more than white spaces, tabs and newlines. Look in the man page for a list of options.

To find out whether a command given to the shell will be executed as an external command or as a builtin command, use the type command. 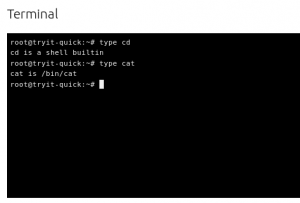 As you can see, the cd command is builtin and the cat command is external.

You can also use this command to show you whether the command is aliased or not. 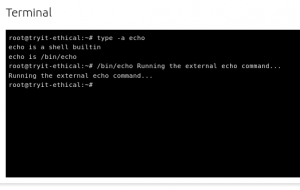 The which command will search for binaries in the $PATH environment variable (variables will be explained later). In the screenshot below, it is determined that cd is builtin, and ls, cp, rm, mv, mkdir, pwd, and which are external commands. 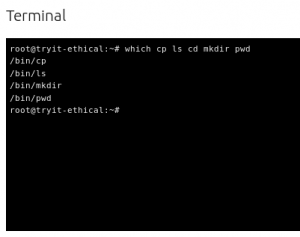 Some distributions enable default aliases to protect users from accidentally erasing files (‘rm -i’, ‘mv -i’, ‘cp -i’)

You can provide one or more aliases as arguments to the alias command to get their definitions. Providing no arguments gives a complete list of current aliases.
root@tryit-ethical:~$ alias c ll
alias c=’clear’
alias ll=’ls -lh –color=auto’

Linux history
For any query or issue, feel free to discuss on http://discuss.eduguru.in