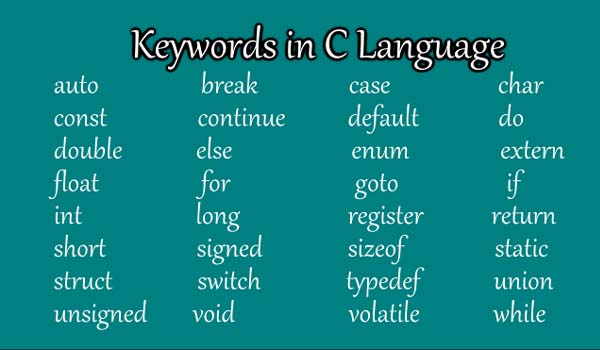 Basics usage of these keywords –

break – Used with any loop OR switch case.

int, float, char, double, long – These are the data types and used during variable declaration.

for, while, do – types of loop structures in C.

void – One of the return type.

goto – Used for redirecting the flow of execution.

return – This keyword is used for returning a value.

continue – It is generally used with for, while and dowhile loops, when compiler encounters this statement it performs the next iteration of the loop, skipping rest of the statements of current iteration.

sizeof – It is used to know the size.

struct, typedef  – Both of these keywords used in structures (Grouping of data types in a single record).

union – It is a collection of variables, which shares the same memory location and memory storage.

C Program to Display Characters from A to Z