The Entity-Relationship (ER) model was originally proposed by Peter in 1976 as a way to unify the network and relational database views. Simply stated the ER model is a conceptual data model that views the real world as entities and relationships. A basic component of the model is the Entity-Relationship diagram which is used to visually represents data objects. Since Chen wrote his paper the model has been extended and today it is commonly used for database design For the database designer, the utility of the ER model is:

It maps well to the relational model. The constructs used in the ER model can easily be transformed into relational tables.

It is simple and easy to understand with a minimum of training. Therefore, the model can be used by the database designer to communicate the design to the end user.

In addition, the model can be used as a design plan by the database developer to implement a data model in a specific database management software.

The ER model views the real world as a construct of entities and association between entities.

Entities are the principal data object about which information is to be collected. Entities are usually recognizable concepts, either concrete or abstract, such as person, places, things, or events which have relevance to the database. Some specific examples of entities are EMPLOYEES, PROJECTS, INVOICES. An entity is analogous to a table in the relational model.

An entity occurrence (also called an instance) is an individual occurrence of an entity. An occurrence is analogous to a row in the relational table.

Associative entities (also known as intersection entities) are entities used to associate two or more entities in order to reconcile a many-to-many relationship.

Subtypes entities are used in generalization hierarchies to represent a subset of instances of their parent entity, called the supertype, but which have attributes or relationships that apply only to the subset.

Associative entities and generalization hierarchies are discussed in more detail below.

Relationships
A Relationship represents an association between two or more entities. An example of a relationship would be:
Employees are assigned to projects
Projects have subtasks
Departments manage one or more projects
Relationships are classified in terms of degree, connectivity, cardinality, and existence.
These concepts will be discussed below.

Attributes can be classified as identifiers or descriptors. Identifiers, more commonly called keys, uniquely identify an instance of an entity. A descriptor describes a non-unique characteristic of an entity instance.

Classifying Relationships
Relationships are classified by their degree, connectivity, cardinality, direction, type, and existence. Not all modeling methodologies use all these classifications.

Binary relationships, the association between two entities is the most common type in the real world. A recursive binary relationship occurs when an entity is related to itself. An example might be “some employees are married to other employees”.

Each employee is assigned to one department

A single employee can be assigned to many projects; conversely, a single project can have assigned to it many employee. Here the cardinality for the relationship between employees and projects is two and the cardinality between project and employee is three. Many-to-many relationships cannot be directly translated to relational tables but instead must be transformed into two or more one-to-many relationships using associative entities.

Generalization Hierarchies
A generalization hierarchy is a form of abstraction that specifies that two or more entities that share common attributes can be generalized into a higher level entity type called a supertype or generic entity. The lower-level of entities become the subtype, or categories, to the supertype. Subtypes are dependent entities.

Subtypes can be either mutually exclusive (disjoint) or overlapping (inclusive). A mutually exclusive category is when an entity instance can be in only one category. The above example is a mutually exclusive category. An employee can either be wages or classified but not both. An overlapping category is when an entity instance may be in two or more subtypes. An example would be a person who works for a university could also be a student at that same university. The completeness constraint requires that all instances of the subtype be represented in the supertype. Generalization hierarchies can be nested. That is, a subtype of one hierarchy can be a supertype of another. The level of nesting is limited only by the constraint of simplicity. Subtype entities may be the parent entity in a relationship but not the child.

ER Notation
There is no standard for representing data objects in ER diagrams. Each modeling methodology uses its own notation. All notational styles represent entities as rectangular boxes and relationships as lines connecting boxes. Each style uses a special set of symbols to represent the cardinality of a connection. The notation used in this document is from Martin. The symbols used for the basic ER constructs are:
•Entities are represented by labeled rectangles. The label is the name of the entity. Entity names should be singular nouns.
•Relationships are represented by a solid line connecting two entities. The name of the relationship is written above the line. Relationship names should be verbs.
•Attributes, when included, are listed inside the entity rectangle. Attributes which are identifiers are underlined. Attribute names should be singular nouns.
• Cardinality of many is represented by a line ending in a crow’s foot. If the crow’s foot is omitted, the cardinality is one.
• Existence is represented by placing a circle or a perpendicular bar on the line. Mandatory existence is shown by the bar (looks like a 1) next to the entity for an instance is required. Optional existence is shown by placing a circle next to the entity that is optional. 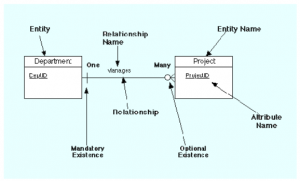 Database Oriented Approach to Data Management
For any query or issue, feel free to discuss on http://discuss.eduguru.in