As with any type of application, Ubuntu has a bunch of games installed by default and many other readily available at the Ubuntu Software Center. You will usually find games by selecting the Applications icon from the Unity Launcher. Next, select Games from the All Applications drop-down list.

The most basic game package is gnome-games, which is available at the Ubuntu Software Center. It includes 16 simple games, ranging from Chess to Mahjongg, and from Sudoku to Four-in-a-row. You can see the full list in Table; those are games designed to give you a rewarding break from work. In five minutes you can be relieved from your stress and go back to your tasks with your batteries renewed. But be careful, because those games are well known for their addictive power! They will certainly help you get through a lazy day. Who hasn’t spent hours at the office playing Minesweeper (Ubuntu’s version is called Mines)? 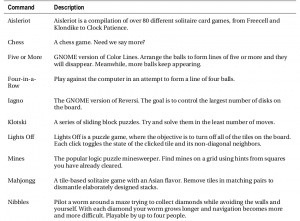 There are plenty more games in the default repositories. Just open the Ubuntu Software Center and browse to the Games department, shown in Figure. There are close to 500 games to choose from! 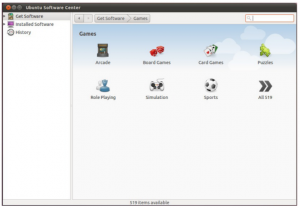 Figure . Search through the Games department and you’ll find many jewels.

Some of the most popular Linux games find their home too in the Ubuntu repositories. Before ditching Ubuntu as a gaming platform, try out these games. You will be surprised!

• Frozen Bubble: Frozen Bubble is a clone of the popular Puzzle Bobble game, in which you attempt to shoot bubbles into groups of the same color to cause them to pop. The game mainly consists of firing randomly chosen bubbles across the board. If the shoot ends up having a clump of at least three bubbles of the same color, they all pop. If some bubbles were stuck only on the popping clump, they fall. In one-player mode, the goal is to pop all the bubbles on the board as quickly as possible. In two-player or network mode, you have to get your opponent to “die” before you.

• Pingus: Pingus is a free clone of the popular Lemmings game. Your goal is to guide a horde of penguins through a world full of obstacles and penguin traps to safety. Although penguins (unlike lemmings) are rather smart, they sometimes rely on you to save them.

• Tremulous: Tremulous is a free, open source game that blends a team-based first-person shooter (FPS) game with elements of a real-time strategy (RTS) game. Players can choose from two unique races, aliens and humans. Players on both teams are able to build working structures in-game like an RTS game. These structures provide many functions, the most important being spawning. The designated builders must ensure there are spawn structures or other players will not be able to rejoin the game after death. Other structures provide automated base defense (to some degree), healing functions, and much more.

• Extreme Tux Racer: Racer is a racing game featuring Tux, the Linux mascot. The goal of the game is to slide down a snow- and ice-covered mountain as quickly as possible, avoiding the trees and rocks that will slow you down. Collect herrings and other goodies while sliding down the hill, but avoid fish bones.

• Frets on Fire: Frets on Fire is a game of musical skill and fast fingers. The aim of the game is to play guitar with the keyboard as accurately as possible.

• FreeCiv: FreeCiv is a Civilizations-like game in which you are the leader of an entire civilization in the search of progress and world domination.

• Pysol: Pysol is a collection of more than 1,000 solitaire games, ranging from Mahjong to Hanoi Puzzle.

How to Install Yii PHP Framework on CentOS 8

The Rise of the IBM PC… and of Microsoft

An Operating System for the Future
For any query or issue, feel free to discuss on http://discuss.eduguru.in