It is a hardware/software which acts as a shield between an organization‟s network and the internet and protects it from the threats like virus, malware, hackers, etc. It can be used to limit the persons who can have access to your network and send information to you. 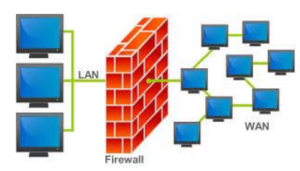 There are two type of traffic in an organization viz. inbound traffic and outbound traffic. Using firewall, it is possible to configure and monitor the traffic of the ports. Only the packets from trusted source address can enter the organization‟s network and the sources which are blacklisted and unauthorized address are denied access to the network. It is important to have firewalls to prevent the network from unauthorized access, but firewall does not guarantee this until and unless it is configured correctly. A firewall can be implemented using hardware as well as software or the combination of both.

Hardware Firewalls: example of hardware firewalls are routers through which the network is connected to the network outside the organization i.e. Internet.

Software Firewalls: These firewalls are installed and installed on the server and client machines and it acts as a gateway to the organizations‟ network.

Proxy-all the outbound traffic is routed through proxies for monitoring and controlling the packet that are routed out of the organization.

Packet Filtering-based on the rules defined in the policies each packet is filtered by their type, port information, and source & destination information. The example of such characteristics is IP address, Domain names, port numbers, protocols etc. Basic packet filtering can be performed by routers.

Stateful Inspection: rather than going through all the field of a packet, key features are defined. The outgoing/incoming packets are judged based on those defined characteristics only.

The firewalls are an essential component of the organizations‟ network. They not only protect the organization against the virus and other malicious code but also prevent the hackers touse your network infrastructure to launch DOS attacks.