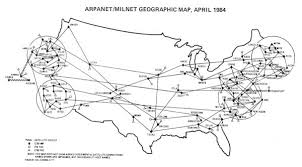 In January 1969, the Advanced Research Projects Agency of the Department of Defense (ARPA) awarded a contract to Bolt, Beranek and Newman (BBN) to design and construct a communications network. By the end of 1969, an experimental ARPANET was operational between four university nodes. This system was the forerunner of the Internet.

The idea for ARPANET came from Lawrence G. Roberts’ 1966 publication, “Towards a Cooperative Network of Time-Shared Computers.” In that influential article, Roberts proposed a packet-switching system for connecting terminals to multiple computers. This approach was far more powerful than existing systems, which depended on circuit switching to share data.

Packet-switching, in turn, was first proposed in Leonard Kleinrock’s doctoral dissertation, published on 24 July 1961, and developed independently by RAND researcher Paul Baran and British researcher Donald Davies. It was a communication method that took all kinds of data, queued it up, and packaged it into blocks that were sent together as a stream. Roberts recognized that packet-switching, which used a variable stream of data, would more effectively transmit data among a network of computers than circuit switching, which demanded a constant rate and led to delay.

Meanwhile, BBN, formed by MIT faculty members Richard H. Bolt, Leo Beranek, and Robert B. Newman, expanded from its initial specialty into acoustics into computers in the late 1950s. BBN bought Digital Corporation’s first PDP-1 and used it to develop computer solutions to hospital care. Working for the National Institutes of Health and Massachusetts General Hospital, BNN used the PDP-1 to build the first time sharing system, which allowed four simultaneous users to work on one computer.

In July, 1968, ARPA sent to a proposal for bids on a device called the Interface Message Processor (IMP). The technology would allow a network of “Host Computers” to communicate with one another. BBN had gathered a team of well-regarded computer researchers, including Frank Heart, Dave Walden, Vinton Cerf, Bernie Cosell, Severo Ornstein, Robert Kahn and Will Crowther. Beating out much larger competitors, BBN won the contract and successfully developed the IMP by September, 1969.

Trending Technologies To Master In 2020

ACE Computer
For any query or issue, feel free to discuss on http://discuss.eduguru.in