Unordered lists are often referred to as bulleted lists. Instead of being numbered, each element in the list has the same marker. The markup to create an unordered list looks just like an ordered list except that the list is created by using <ul>…</ul> tags rather than ol . The elements of the list are placed within <li> tags, just as with ordered lists.

Browsers have standardized on using a solid bullet to mark each item in an unordered list by default. Text browsers usually use an asterisk for these lists. The following input and output example shows an unordered list. 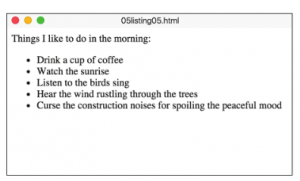 HTML Does Not Describe Page Layout

The Current and Evolving Standard: HTML5