A protection domain can be scoped by a set of objects that are currently directly accessible by a principal, where a principal is an entity in the computer system to which permissions are granted. A principal can access objects in the protection domain by virtue of the permissions it enjoys over the objects in the protection domain. These permissions are specified explicitly in a security policy file, which is a text file that can be edited manually or through the Policy Tool. The Java 2 security architecture allows the combination of a system security policy, defined by the system administrator, with one or more user-defined security policies. A default system policy file comes with the installation of the Java 2 SDK.

Notice that, even if an arbitrary number of policy files can be specified, there is only one policy (meaning, one set of protection domains) in effect for the JVM at any given time. That policy might be the result of processing the information from many policy files. The default policy implementation, via the java.security.Policy class, has a public refresh() method that can be used to re-init the policy, eventually re-reading the policy file(s). However, there is no automatic policy change: refresh() must be called explicitly.

A policy file consists of a number of grant entries. The syntax of the grant entry is as follows:

Figure. The Syntax of a grant Entry in a Policy File

Notice that, even if the default policy implementation is file-based, application developers can implement their own Policy subclass, providing an implementation of the abstract methods in the java.security.Policy class. There could be multiple instances of the Policy class, even if only one is in effect at any time. The currently installed Policy object can be obtained by calling the static getPolicy() method in the Policy class. Codes with permission to reset the policy can change the currently installed Policy object by calling the static setPolicy() method in the Policy class.

Protection domains generally fall into two categories: system domain and application domains. We can think of the system domain as a single collection of all system code, which is not subjected to any policy restrictions and is granted all permissions. An application domain is specific to an application or applet and can include the domains of extensions as well, since even the standard extensions are subjected to the security policy specified in the policy file. The default java.policy file grants all extensions full access permissions to all system resources (java.security.AllPermission), provided the extension classes are stored as JAR files in the extensions directory ${java.home}\lib\ext or its subdirectories. On Windows systems, the default extensions directory is usually C:\Program Files\JavaSoft\JRE\1.2\lib\ext.

Notice that a thread of execution (which is often, but not necessarily, tied to a single Java thread, which in turn is not necessarily tied to the thread concept of the underlying operating system) may occur completely within a single protection domain or may involve an application domain and also the system domain. All protected resources, such as the file system, the networking facility, the screen and the keyboard, are accessible only via the system domains, as shown in the following figure: 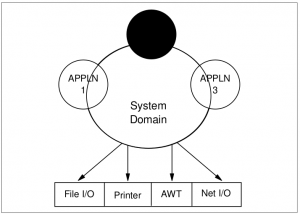 The Java application environment maintains a mapping from code (classes and instances) to their protection domains and then to their permissions as shown in the following figure:

Evolution of the Java Security Model