No network discussion or network device explanation would be complete without a brief overview of the Open Systems Interconnection (OSI) model. Although this model may seem overly complex, it does have value in our later discussions of attacks, defenses, and infrastructure, as you will see. The OSI model is a general framework that enables network protocols, software, and systems to be designed around a general set of guidelines. Common guidelines allow higher probability of system compatibility and logical traffic flow. In other words, if we all play by the same rules everyone will get along with as few errors as possible.

The OSI model, shown in the left side of Figure 1, has seven layers. As you read through each layer’s function, keep in mind that we are working our way through how data flows. Each layer is connected to the next; this concept will prove valuable as a reference for more advanced data analysis. 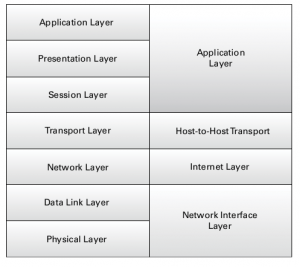 Two mnemonics that I use to remember the order of layers are:

How to Hack an ADSL Router
For any query or issue, feel free to discuss on http://discuss.eduguru.in