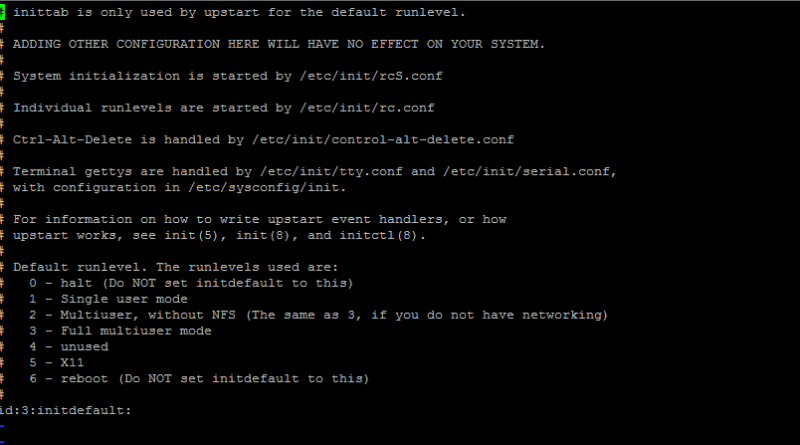 CentOS can be configured to boot into one of a number of different run levels. During the boot sequence, a process named init looks in the /etc/inittab file to find the default run level. Having identified the run level it proceeds to execute the corresponding startup scripts located in the /etc/rc.d sub-directory.

Scripts that start with an “S” are invoked before those prefixed with a “K”. The number in the filename controls the order in which the script will be executed with that group (either “S” or “K”). You wouldn’t, for example, want to start NFS before the basic networking is up and running. It is also worth noting that the files in the rc.d sub-directories are not the actual scripts themselves but rather symbolic links to the actual files located in /etc/rc.d/init.d.

A service is essentially a process that typically runs in the background to provide specific functionality. The sshd service, for example, is the background process (also referred to as a daemon) that provides secure shell access to the system. Different run levels are configured to automatically launch different collections of services, depending on the functionality that is to be provided at that particular level.

As previously outlined, CentOS 6 can be booted into one of a number of run levels. The default run level to which the system is configured to boot will, in turn, dictate which services are started:

The default run level for an CentOS 6 system is defined within the /etc/inittab file. To identify the current default level or change the default to a different setting, load this file into an editor (keeping in mind that root privileges will be required).

The relevant section of a sample /etc/inittab file reads as follows:

The key line in the example above is the init default setting:

This tells the init process that the default run level for the system is run level 3. To change to a different run level simply change the number to the desired runlevel and save the /etc/inittab file.

The default runlevel can be set either by using the systemctl command or making a symbolic link of runlevel targets to the default target file.

Before changing the default runlevel, we have to check out the available targets.

Change default to runlevel 3 (nothing but a multi-user.target).

Reboot and check it out.