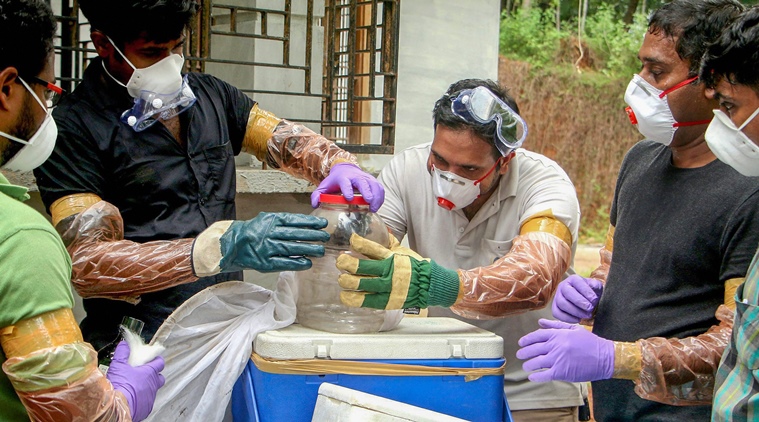 The Nipah virus infection starts with 3-14 days of fever and headache, followed by drowsiness, disorientation and mental confusion. The acute encephalitis then progresses to coma within 24-48 hours.

Scientists have launched a multi-agency effort to contain the Nipah virus outbreak in Kerala, which has claimed six lives so far, including that of two brothers and a nursing assistant who treated them. A rapid response team from the National Centre for Disease Control in New Delhi, the National Institute of Virology in Pune and the Integrated Disease Surveillance Programme in Kerala, where a high alert has been issued, have initiated a joint investigation into the outbreak, they said.

Apart from the six deaths, officials said, at least eight others are undergoing treatment in Kozhikode for complications linked to the virus.

“Confirming a human infection with Nipah virus is indeed a matter of concern but there is no need for panic because a timely diagnosis and rapid mobilisation of central and state health assets on the ground should mitigate the spread. We are fully prepared for laboratory testing at par with international standards,” said a senior scientist at the National Institute of Virology.

Dr Arun Kumar, head of the Manipal Virus Research Centre, who visited the village at Kozhikode’s Changaroth panchayat from where two deaths from a family were reported told The Indian Express that there were no new cases there. “I visited the locality two days ago. While there is concern about the spread of infection among health workers, there is no need for panic,” he said.

The NIV received samples of those infected Saturday evening and results were confirmed and reported to the Union Health Ministry the next day, said Dr D T Mourya, director, NIV.

According to reports, six persons are being treated at the medical college hospital at Kozhikode, one at a private hospital there and another at Kochi.

The Nipah virus infection was first recognised in a large outbreak of 265 suspected cases and 105 deaths – a fatality rate of 40 per cent — in peninsular Malaysia from September 1998 to April 1999.The virus was first isolated from an outbreak of fatal encephalitis cases in the village of Nipah in the late 90s during investigations for Japanese encephalitis. The virus naturally occurs in different species of fruit bats.

So far, most Nipah outbreaks have been reported from Bangladesh and South East Asian countries. The first reported outbreak of Nipah in India was in Siliguri in 2001, when 33 persons fell ill after exposure to patients. A second outbreak was reported in 2007 in West Bengal’s Nadia in 2007, when 30 cases were identified, including five deaths.

The Nipah virus infection starts with 3-14 days of fever and headache, followed by drowsiness, disorientation and mental confusion. The acute encephalitis then progresses to coma within 24-48 hours.