Object-oriented programming (OOP) is at the core of Java. In fact, all Java programs are to at least some extent object-oriented. OOP is so integral to Java that it is best to understand its basic principles before you begin writing even simple Java programs. Therefore, this topic begins with a discussion of the theoretical aspects of OOP.

All computer programs consist of two elements: code and data. Furthermore, a program can be conceptually organized around its code or around its data. That is, some programs are written around “what is happening” and others are written around “who is being affected.” These are the two paradigms that govern how a program is constructed. The first way is called the process-oriented model. This approach characterizes a program as a series of linear steps (that is, code). The process-oriented model can be thought of as code acting on data. Procedural languages such as C employ this model to considerable success.

An essential element of object-oriented programming is abstraction. Humans manage complexity through abstraction. For example, people do not think of a car as a set of tens of thousands of individual parts. They think of it as a well-defined object with its own unique behavior. This abstraction allows people to use a car to drive to the grocery store without being overwhelmed by the complexity of the parts that form the car. They can ignore the details of how the engine, transmission, and braking systems work. Instead, they are free to utilize the object as a whole.

A powerful way to manage abstraction is through the use of hierarchical classifications. This allows you to layer the semantics of complex systems, breaking them into more manageable pieces. From the outside, the car is a single object. Once inside, you see that
the car consists of several subsystems: steering, brakes, sound system, seat belts, heating, cellular phone, and so on. In turn, each of these subsystems is made up of more specialized units. For instance, the sound system consists of a radio, a CD player, and/or a tape player. The point is that you manage the complexity of the car (or any other complex system) through the use of hierarchical abstractions.

Hierarchical abstractions of complex systems can also be applied to computer programs. The data from a traditional process-oriented program can be transformed by abstraction into its component objects. A sequence of process steps can become a collection of messages between these objects. Thus, each of these objects describes its own unique behavior. You can treat these objects as concrete entities that respond to messages telling them to do something. This is the essence of object-oriented programming.

Object-oriented concepts form the heart of Java just as they form the basis for human understanding. It is important that you understand how these concepts translate into programs. As you will see, object-oriented programming is a powerful and natural paradigm for creating programs that survive the inevitable changes accompanying the life cycle of any major software project, including conception, growth, and aging. For example, once you have well-defined objects and clean, reliable interfaces to those objects, you can gracefully decommission or replace parts of an older system without fear.

All object-oriented programming languages provide mechanisms that help you implement the object-oriented model. They are encapsulation, inheritance, and polymorphism. Let’s take a look at these concepts now.

Encapsulation is the mechanism that binds together code and the data it manipulates, and keeps both safe from outside interference and misuse. One way to think about encapsulation is as a protective wrapper that prevents the code and data from being arbitrarily accessed by other code defined outside the wrapper. Access to the code and data inside the wrapper is tightly controlled through a well-defined interface. To relate this to the real world, consider the automatic transmission on an automobile. It encapsulates hundreds of bits of information about your engine, such as how much you are accelerating, the pitch of the surface you are on, and the position of the shift lever. You, as the user, have only one method of affecting.

this complex encapsulation: by moving the gear-shift lever. You can’t affect the transmission by using the turn signal or windshield wipers, for example. Thus, the gear-shift lever is a well-defined (indeed, unique) interface to the transmission. Further, what occurs inside the transmission does not affect objects outside the transmission. For example, shifting gears does not turn on the headlights! Because an automatic transmission is encapsulated, dozens of car manufacturers can implement one in any way they please. However, from the driver’s point of view, they all work the same. This same idea can be applied to programming. The power of encapsulated code is that everyone knows how to access it and thus can use it regardless of the implementation details—and without fear of unexpected side effects.

In Java, the basis of encapsulation is the class. Although the class will be examined in great detail later in this book, the following brief discussion will be helpful now. A class defines the structure and behavior (data and code) that will be shared by a set of objects. Each object of a given class contains the structure and behavior defined by the class, as if it were stamped out by a mold in the shape of the class. For this reason, objects are sometimes referred to as instances of a class. Thus, a class is a logical construct; an object has physical reality.

When you create a class, you will specify the code and data that constitute that class. Collectively, these elements are called members of the class. Specifically, the data defined by the class are referred to as member variables or instance variables. The code that operates on that data is referred to as member methods or just methods. (If you are familiar with C/C++, it may help to know that what a Java programmer calls a method, a C/C++ programmer calls a function.) In properly written Java programs, the methods define how the member variables can be used. This means that the behavior and interface of a class are defined by the methods that operate on its instance data.

Inheritance is the process by which one object acquires the properties of another object. This is important because it supports the concept of hierarchical classification. As mentioned earlier, most knowledge is made manageable by hierarchical (that is, top-down) classifications. For example, a Golden Retriever is part of the classification dog, which in turn is part of the mammal class, which is under the larger class animal. Without the use of hierarchies, each object would need to define all of its characteristics explicitly. However, by use of inheritance, an object need only define those qualities that make it unique within its class. It can inherit its general attributes from its parent. Thus, it is the inheritance mechanism that makes it possible for one object to be a specific instance of a more general case. Let’s take a closer look at this process. 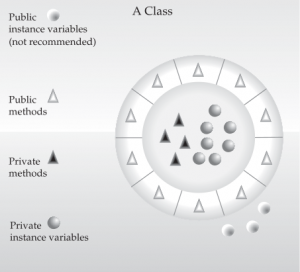 Most people naturally view the world as made up of objects that are related to each other in a hierarchical way, such as animals, mammals, and dogs. If you wanted to describe animals in an abstract way, you would say they have some attributes, such as size, intelligence, and type of skeletal system. Animals also have certain behavioral aspects; they eat, breathe, and sleep. This description of attributes and behavior is the class definition for animals. If you wanted to describe a more specific class of animals, such as mammals, they would have more specific attributes, such as type of teeth, and mammary glands. This is known as a subclass of animals, where animals are referred to as mammals’ superclass. 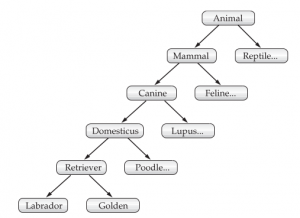 Polymorphism (from Greek, meaning “many forms”) is a feature that allows one interface to be used for a general class of actions. The specific action is determined by the exact nature of the situation. Consider a stack (which is a last-in, first-out list). You might have a program that requires three types of stacks. One stack is used for integer values, one for floating-point values, and one for characters. The algorithm that implements each stack is the same, even though the data being stored differs. In a non–object-oriented language, you would be required to create three different sets of stack routines, with each set using different names. However, because of polymorphism, in Java you can specify a general set of stack routines that all share the same names.

More generally, the concept of polymorphism is often expressed by the phrase “one interface, multiple methods.” This means that it is possible to design a generic interface to a group of related activities. This helps reduce complexity by allowing the same interface
to be used to specify a general class of action. It is the compiler’s job to select the specific actionn(that is, method) as it applies to each situation. You, the programmer, do not need to make this selection manually. You need only remember and utilize the general interface. 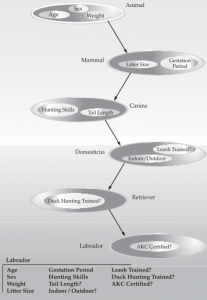 Extending the dog analogy, a dog’s sense of smell is polymorphic. If the dog smells a cat, it will bark and run after it. If the dog smells its food, it will salivate and run to its bowl. The same sense of smell is at work in both situations. The difference is what is being smelled, that is, the type of data being operated upon by the dog’s nose! This same general concept can be implemented in Java as it applies to methods within a Java program.

Polymorphism, Encapsulation, and Inheritance Work Together

When properly applied, polymorphism, encapsulation, and inheritance combine to produce a programming environment that supports the development of far more robust and scalable programs than does the process-oriented model. A well-designed hierarchy of classes is the basis for reusing the code in which you have invested time and effort developing and testing. Encapsulation allows you to migrate your implementations over time without breaking the code that depends on the public interface of your classes. Polymorphism allows you to create clean, sensible, readable, and resilient code.

Of the two real-world examples, the automobile more completely illustrates the power of object-oriented design. Dogs are fun to think about from an inheritance standpoint, but cars are more like programs. All drivers rely on inheritance to drive different types (subclasses) of vehicles. Whether the vehicle is a school bus, a Mercedes sedan, a Porsche, or the family minivan, drivers can all more or less find and operate the steering wheel, the brakes, and the accelerator. After a bit of gear grinding, most people can even manage the difference between a stick shift and an automatic, because they fundamentally understand their common superclass, the transmission.

People interface with encapsulated features on cars all the time. The brake and gas pedals hide an incredible array of complexity with an interface so simple you can operate them with your feet! The implementation of the engine, the style of brakes, and the size of the tires have no effect on how you interface with the class definition of the pedals. The final attribute, polymorphism, is clearly reflected in the ability of car manufacturers to offer a wide array of options on basically the same vehicle. For example, you can get an antilock braking system or traditional brakes, power or rack-and-pinion steering, and 4-, 6-,or 8-cylinder engines. Either way, you will still press the brake pedal to stop, turn the steering wheel to change direction, and press the accelerator when you want to move. The same interface can be used to control a number of different implementations.

Java Program to print Odd numbers from 1 to n or 1 to 100
For any query or issue, feel free to discuss on http://discuss.eduguru.in