A firewall is a structure intended to keep a fire from spreading. Buildings have firewalls made of brick walls completely dividing sections of the building. In a car a firewall is the metal wall separating the engine and passenger compartments.

Internet firewalls are intended to keep the flames of Internet hell out of your private LAN. Or, to keep the members of your LAN pure and chased by denying them access the all the evil Internet temptations. The first computer firewall was a non−routing Unix host with connections to two different networks. One network card connected to the Internet and the other to the private LAN. To reach the Internet from the private network, you had to logon to the firewall (Unix) server. You then used the resources of the system to access the Internet. For example, you could use X−windows to run Netscape’s browser on the firewall system and have the display on your work station. With the browser running on the firewall it has access to both networks.

This sort of dual homed system (a system with two network connections) is great if you can TRUST ALL of your users. You can simple setup a Linux system and give an account accounts on it to everyone needing Internet access. With this setup, the only computer on your private network that knows anything about the outside world is the firewall. No one can download to their personal workstations. They must first download a file to the firewall and then download the file from the firewall to their workstation. There are three basic types of firewalls depending on: 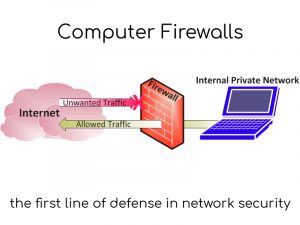 A dedicated firewall acts as a protective barrier to keep destructive forces away from your mission-critical data. An Appin Security Engineer assists you with making sure the rules you need applied to our network are safe ones while still accomplishing your business need of supplying public access to desired data. However, you establish and are the sole owner of the set of rules that defines unwanted traffic. Based on this set of rules, information that is sent to your server is inspected and then filtered. 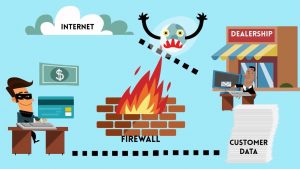 As the most “basic” and oldest type of firewall architecture, packet-filtering firewalls basically create a checkpoint at a traffic router or switch. The firewall performs a simple check of the data packets coming through the router—inspecting information such as the destination and origination IP address, packet type, port number, and other surface-level information without opening up the packet to inspect its contents.

If the information packet doesn’t pass the inspection, it is dropped.

The good thing about these firewalls is that they aren’t very resource-intensive. This means they don’t have a huge impact on system performance and are relatively simple. However, they’re also relatively easy to bypass compared to firewalls with more robust inspection capabilities.

As another simplistic firewall type that is meant to quickly and easily approve or deny traffic without consuming significant computing resources, circuit-level gateways work by verifying the transmission control protocol (TCP) handshake. This TCP handshake check is designed to make sure that the session the packet is from is legitimate.

While extremely resource-efficient, these firewalls do not check the packet itself. So, if a packet held malware, but had the right TCP handshake, it would pass right through. This is why circuit-level gateways are not enough to protect your business by themselves.

These firewalls combine both packet inspection technology and TCP handshake verification to create a level of protection greater than either of the previous two architectures could provide alone.

However, these firewalls do put more of a strain on computing resources as well. This may slow down the transfer of legitimate packets compared to the other solutions.

Proxy firewalls operate at the application layer to filter incoming traffic between your network and the traffic source—hence, the name “application-level gateway.” These firewalls are delivered via a cloud-based solution or another proxy device. Rather than letting traffic connect directly, the proxy firewall first establishes a connection to the source of the traffic and inspects the incoming data packet.

This check is similar to the stateful inspection firewall in that it looks at both the packet and at the TCP handshake protocol. However, proxy firewalls may also perform deep-layer packet inspections, checking the actual contents of the information packet to verify that it contains no malware.

Once the check is complete, and the packet is approved to connect to the destination, the proxy sends it off. This creates an extra layer of separation between the “client” (the system where the packet originated) and the individual devices on your network—obscuring them to create additional anonymity and protection for your network.

If there’s one drawback to proxy firewalls, it’s that they can create significant slowdown because of the extra steps in the data packet transferal process.

Many of the most recently-released firewall products are being touted as “next-generation” architectures. However, there is not as much consensus on what makes a firewall truly next-gen.

Some common features of next-generation firewall architectures include deep-packet inspection (checking the actual contents of the data packet), TCP handshake checks, and surface-level packet inspection. Next-generation firewalls may include other technologies as well, such as intrusion prevention systems (IPSs) that work to automatically stop attacks against your network.

The issue is that there is no one definition of a next-generation firewall, so it’s important to verify what specific capabilities such firewalls have before investing in one.

Software firewalls include any type of firewall that is installed on a local device rather than a separate piece of hardware (or a cloud server). The big benefit of a software firewall is that it’s highly useful for creating defense in depth by isolating individual network endpoints from one another.

Hardware firewalls use a physical appliance that acts in a manner similar to a traffic router to intercept data packets and traffic requests before they’re connected to the network’s servers. Physical appliance-based firewalls like this excel at perimeter security by making sure malicious traffic from outside the network is intercepted before the company’s network endpoints are exposed to risk.

The major weakness of a hardware-based firewall, however, is that it is often easy for insider attacks to bypass them. Also, the actual capabilities of a hardware firewall may vary depending on the manufacturer—some may have a more limited capacity to handle simultaneous connections than others, for example.

Whenever a cloud solution is used to deliver a firewall, it can be called a cloud firewall, or firewall-as-a-service (FaaS). Cloud firewalls are considered synonymous with proxy firewalls by many, since a cloud server is often used in a proxy firewall setup (though the proxy doesn’t necessarily have to be on the cloud, it frequently is).

The big benefit of having cloud-based firewalls is that they are very easy to scale with your organization. As your needs grow, you can add additional capacity to the cloud server to filter larger traffic loads. Cloud firewalls, like hardware firewalls, excel at perimeter security.