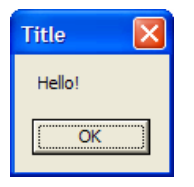 The First Windows Program in C

To keep things simple we would begin with a program that merely displays a “Hello” message in a message box. Here is the program…

Naturally a question would come to your mind—how do I create and run this program and what output does it produce. Firstly take a look at the output that it produces. Here it is…

Let us now look at the steps that one needs to carry to create and execute this program:

To execute the program follow the steps mentioned below:

Let us now try to understand the program.

Note the __stdcall before WinMain( ). It indicates the calling convention used by the WinMain( ) function. Calling Conventions indicate two things:

HINSTANCE and LPSTR are nothing but typedefs. The first is an unsigned int and the second is a pointer to a char. These macros are defined in ‘windows.h’. This header file must always be included while writing a C program under Windows. hInstance, hPrevInstance, lpszCmdLine and nCmdShow are simple variable names. In place of these we can use i, j, k and l respectively. Let us now understand the meaning of these parameters as well as the rest of the program.

WinMain( ) receives four parameters which are as under:

hInstance: This is the ‘instance handle’ for the running application. Windows creates this ID number when the application starts. We will use this value in many Windows functions to identify an application’s data.

A handle is simply a 32-bit number that refers to an entity. The entity could be an application, a window, an icon, a brush, a cursor, a bitmap, a file, a device or any such entity.

The actual value of the handle is unimportant to your programs, but the Windows module that gives your program the handle knows how to use it to refer to an entity.

What is important is that there is a unique handle for each entity and we can refer and reach the entity only using its handle.

hPrevInstance: This parameter is a remnant of earlier versions of Windows and is no longer significant. Now it always contains a value 0. It is being persisted with only to ensure backward compatibility

lpszCmdLine: This is a pointer to a character string containing the command line arguments passed to the program. This is similar to the argv, argc parameters passed to main( ) in a DOS program.

nCmdShow: This is an integer value that is passed to the function. This integer tells the program whether the window that it creates should appear minimized, as an icon, normal, or maximized when it is displayed for the first time.

The MessageBox( ) function pops up a message box whose title is ‘Title’ and which contains a message ‘Hello!’.

‘myapp.exe’ is the name of our application, whereas, ‘abc ijk xyz’ represents command line arguments. The parameter lpszCmdline points to the string “abc ijk xyz”. This string can be printed using the following statement.

If the entire command line including the filename is to be retrieved we can use the GetCommandLine( ) function.

C program to convert time in Hours:Minutes:Seconds to seconds