WHAT IS BLUETOOTH? & HOW DOES IT WORK?

Bluetooth is an open wireless protocol for exchanging data over short distances between devices. It’s not a wireless Internet connection like Wi-Fi. It’s a fast way to hook up devices without cords, such as headsets connected to cell phones, computers connected to wireless printers or keyboards, or PDAs syncing with computers. Because Bluetooth is wireless, it can connect up to eight devices at a time and it’s fast. The range of Bluetooth is about 10 meters and it is not a line-of-sight connection, which means that the walls in your house won’t block the connection.

HOW BLUETOOTH CREATES A CONNECTION 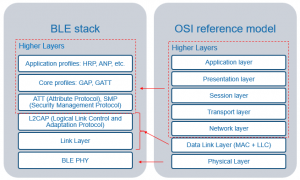 The physical layer (PHY) contains the actual physical interface and the rules for its use. In Bluetooth, the PHY is radio frequency (RF) and the modulation and detection processes are listed in the specification. The PHY is made reliable, link connection and detachment rules are provided by the data-link layer. This layer contains Media Access Control (MAC), which is a set of rules that determine the structure of basic data packets and how they are sent, and the Logical Link Control (LLC), which provides the protocol for link establishment and detachment. The network layer provides transparent transfer of data between transport entities (from source to destination) on each end of the communication link. In other words, a Bluetooth device can appear to be a serial cable to the transport layer. Fourth and above layers in the OSI model are called higher layers. The transport layer includes optimization routines and other quality of service (QoS) methods for efficient data exchange, and the session layer contains the method for controlling the dialog between applications on either end of the link. Finally, the presentation layer resolves differences between format and data representation between entities. As one moves up the OSI layers, their implementation gradually changes from hardware, to firmware, and finally into software. The Bluetooth protocol stack exhibits the same behaviour.

Bluetooth protocol stack is not exactly equal to the OSI model, but the layers are transition from implementation in hardware and firmware (lower layers) to software (higher layers). If each of these groups oflayers is separate entities,such as a PC card and Notebook computer, then they can communicate with each other through the host controller interface (HCI). HCI provides paths for
data, audio and control signals between the Bluetooth module and host.The radio completes the physical layer by providing a transmitter and receiver for two-way communication. Data packets are assembled and fed to the radio by the baseband state 31 machine. The link controller provides more complex state operations, such as the standby,connect and low-power modes.

The logical link control and adaptation protocol (L2CAP) establishes virtual channels between hosts that can keep track of several simultaneous sessions such as multiple file transfers. L2CAP also takes application data and breaks it into Bluetooth-size morsels for transmission and reverses the process or received data. Radio frequency communication (RFCOMM) is the Bluetooth serial port emulator and its main purpose is to run an application to emulate a wired serial port instead of RF link. It includes service discovery protocol (SDP),object exchange (OBEX), telephony control protocol specification (TCS) and Wireless Application Protocol (WAP). Beside of data communications, Bluetooth has a special provision for real-time, two-way, digitized voice as well. Once these voice packets are created by an application, they bypass most of the data protocol stack and are handled directly by the baseband layer.

This prevents unacceptable delay between the time the packets are created and the time they arrive at their destination The Bluetooth radio and the baseband/link controller consist of hardware which is usually available as one or two integrated circuits. The firmware-based link manager and one end of the host controller interface, however the Bluetooth module The remaining parts of the protocol stack and the host end of HCI can be implemented in software on the host itself.

MOBILE SECURITY IMPORTANCE
For any query or issue, feel free to discuss on http://discuss.eduguru.in