Three important characteristics of the database approach are

(2) support of multiple user views; and

(3) use of a catalog to store the database description (schema).

In this post we specify an architecture for database systems, called the three-schema architecture, which was proposed to help achieve and visualize these characteristics. We then discuss the concept of data independence.

The goal of the three-schema architecture, illustrated in Figure 1, is to separate the user applications and the physical database. In this architecture, schemas can be defined at the following three levels: 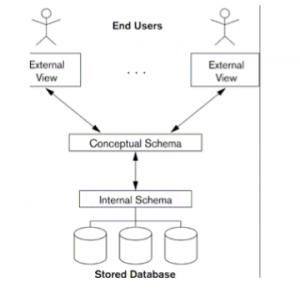 The three-schema architecture is a convenient tool for the user to visualize the schema levels in a database system. Most DBMSs do not separate the three levels completely, but support the three-schema architecture to some extent. Some DBMSs may include physical-level details in the conceptual schema. In most DBMSs that support user views, external schemas are specified in the same data model that describes the conceptual-level information. Some DBMSs allow different data models to be used at the conceptual and external levels.

Notice that the three schemas are only descriptions of data; the only data that actually exists is at the physical level. In a DBMS based on the three-schema architecture, each user group refers only to its own external schema. Hence, the DBMS must transform a request specified on an external schema into a request against the conceptual schema, and then into a request on the internal schema for processing over the stored database. If the request is a database retrieval, the data extracted from the stored database must be reformatted to match the user’s external view. The processes of transforming requests and results between levels are called mappings. These mappings may be time-consuming, so some DBMSs—especially those that are meant to support small databases—do not support external views. Even in such systems, however, a certain amount of mapping is necessary to transform requests between the conceptual and internal levels.

Whenever we have a multiple-level DBMS, its catalog must be expanded to include information on how to map requests and data among the various levels. The DBMS uses additional software to accomplish these mappings by referring to the mapping information in the catalog. Data independence is accomplished because, when the schema is changed at some level, the schema at the next higher level remains unchanged; only the mapping between the two levels is changed. Hence, application programs referring to the higher-level schema need not be changed.

Data Models
For any query or issue, feel free to discuss on http://discuss.eduguru.in