A hacking methodology refers to the step-by-step approach used by an aggressor to attack a target such as a computer network. There is no specific step-by-step approach used by all hackers. As can be expected when a group operates outside the rules as hackers do, rules do not apply the same way. A major difference between a hacker and an ethical hacker is the code of ethics to which each subscribes. 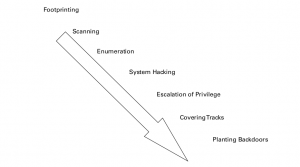 The Early Days of Hacking

Bad Guys and Good Guys or Hackers and Ethical Hackers

Identifying Basic Physical Security Vulnerabilities
For any query or issue, feel free to discuss on http://discuss.eduguru.in