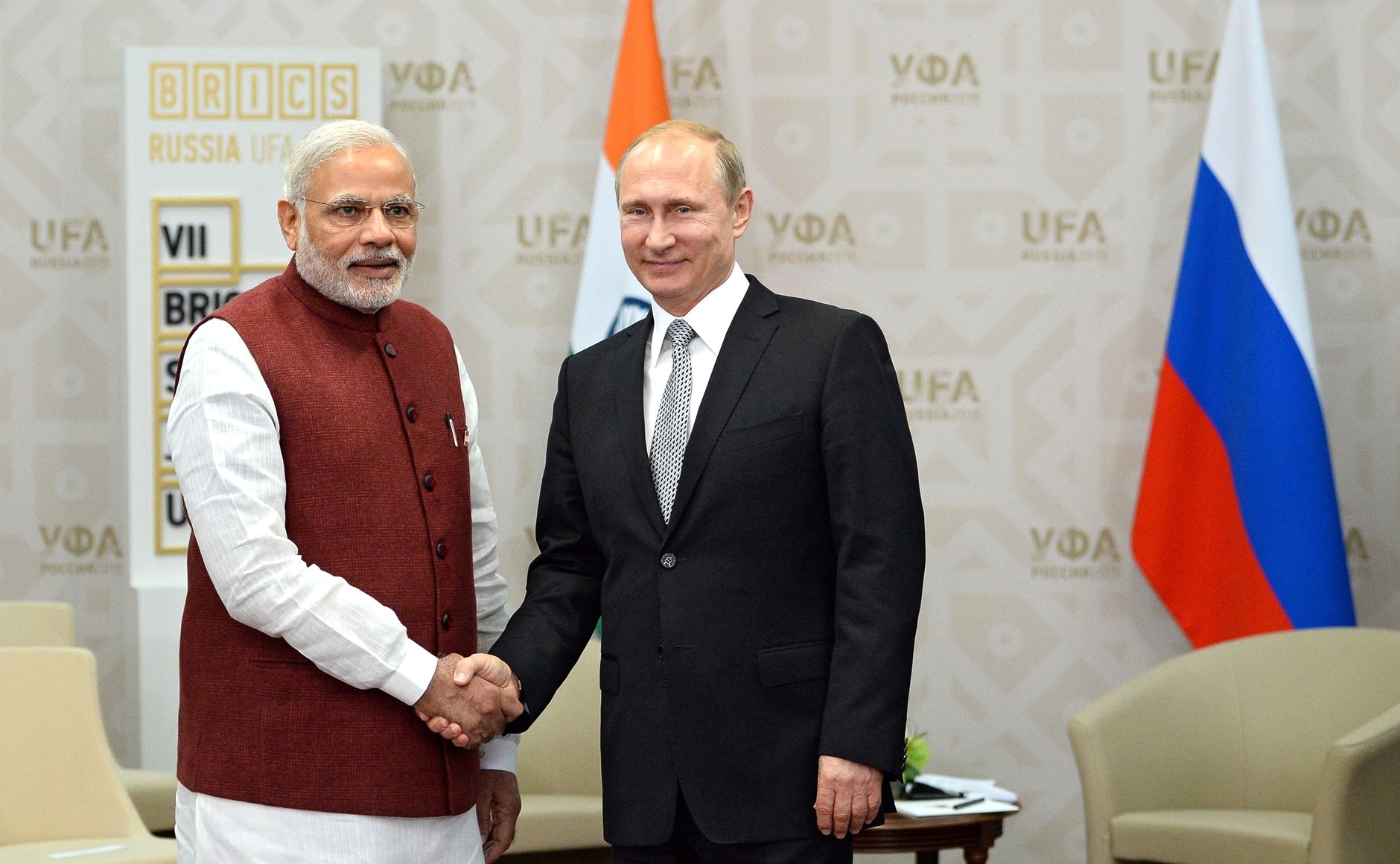 Prime Minister Narendra Modi on Monday arrived in Russia’s Black Sea coastal city Sochi for an informal summit with President Vladimir Putin that will focus on pressing global and regional issues, including impact of the USA’s withdrawal from the Iran nuclear deal.

Russian President Vladimir Putin shakes hands with India’s Prime Minister Narendra Modi prior their talks at the St. Petersburg International Economic Forum in St. Petersburg, Russia. AP File image of Vladimir Putin with Narendra Modi at the St Petersburg International Economic Forum. AP
The aim of the informal summit is to use the friendship and trust between the two countries to create convergence on key global and regional issues, official sources said.

They said the two leaders will meet for around four to six hours for the “agendaless” talks where deliberations on bilateral issues are likely to be limited.

“Greetings to the friendly people of Russia. I look forward to my visit to Sochi on Tuesday and my meeting with President Putin. It is always a pleasure to meet him,” Modi had tweeted on Sunday.

“Am confident the talks with President Putin will further strengthen the Special and Privileged Strategic Partnership between India and Russia,” He also tweeted.

The issues on the table may include economic impact on India and Russia in the wake of the USA’s withdrawal from the Iran nuclear deal, situation in Afghanistan, Syria, threat of terrorism and matters relating to upcoming Shanghai Cooperation Organisation (SCO) and BRICS summits.

The sources said possible impact of the United States’ sanctions against Russia under Countering America’s Adversaries through Sanctions Act (CAATSA) on Indo-Russia defence cooperation may also figure during the talks between Modi and Putin.

There have been apprehensions that the United States’ decision on Iran deal may impact New Delhi’s oil import from the Persian Gulf nation as well as on the Chabahar port project. Iran is the third largest supplier of crude oil to India after Saudi Arabia and Iraq.

The countries having financial dealings with Iran are expected to be hit by the comprehensive sanctions regime announced by the Trump administration after withdrawal from the nuclear deal.

The sources said the large part of the informal meeting between Modi and Putin will be one-to-one and there may be limited segment for restricted delegation level discussions.

They said President Putin will to also host a lunch for Modi.

It would be Modi’s second informal summit in as many months as he held talks with Chinese President Xi Jingpin in China’s Wuhan in a similar format last month.

Sources said there could be more such informal summits between Modi and other world leaders in the coming months as India eyes to play an important role in global power dynamics. They said President Putin will be in India later this year for the annual summit during which key bilateral issues will be deliberated upon.

The annual summit talks between the top leadership of the two countries have been taking place alternately in Moscow and New Delhi since 2000.