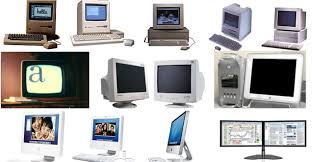 The first monitors use CRT technology (cathode ray rube) and firstly made in 1922.

The earlier commercial version was produced in 1954. This technology used for 50 years until 2000 when the LCD technology replace it.

The CRT technology used by computer monitors, and also for televisions too.

Approximetly in 2000 the bigger monitor manufacturers start to use the newer LCD technology (Liquid-crystal display).

Nowdays most of the displays use this technology, and almost replaced the CRT displays (almost in every area).

The lcd displays has two main type according the type of panel: TN (Twisted nematic) and IPS (In-plane switching).

The IPS models are much more expensive than regular TN displays but use mainly professionals (and apple owners :))  )

I personally recommend the IPS monitors – because those models has so much better colors and viewing angles.

And the newset type of display is OLED. (which maybe familiar from mobilphone especially samsung phones with AMOLED).

The History of Computer Mouse

The History of the Computer Keyboard
For any query or issue, feel free to discuss on http://discuss.eduguru.in