we use the public Internet, a specific computer network (and one which probably most readers have used), as our principle vehicle for discussing computer networking protocols. But what is the Internet? We would like to give you a one-sentence definition of the Internet, a definition that you can take home and share with your family and friends. Alas, the Internet is very complex, both in terms of its hardware and software components, as well as the services it provides.

A Nuts and Bolts Description Instead of giving a one-sentence definition, let’s try a more descriptive approach. There are a couple of ways to do this. One way is to describe the nuts and bolts of the Internet, that is, the basic hardware and software components that make up the Internet. Another way is to describe the Internet in terms of a networking infrastructure that provides services to distributed applications. Let’s begin with the nuts-and-bolts description, using Figure -1 to illustrate our discussion. 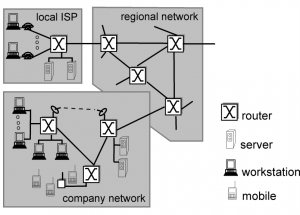 Figure -1: Some “pieces” of the Internet

● The public Internet is a world-wide computer network, i.e., a network that interconnects millions of computing devices throughout the world. Most of these computing devices are traditional desktop PCs, Unix-based workstations, and so called “servers” that store and transmit information such as WWW pages and e-mail messages. Increasingly, non-traditional computing devices such as Web TVs, mobile computers, pagers and toasters are being connected to the Internet. (Toasters are not the only rather unusual devices to have been hooked up to the Internet; see the The Future of the Living Room.) In the Internet jargon, all of these devices are called hosts or end systems. The Internet applications with which many of us are familiar, such as the WWW and e-mail, are network application programs that run on such end systems.

● End systems are connected together by communication links. We’ll see in section 1.5 that there are many types of communication links. Links are made up of different types of physical media: coaxial cable, copper wire, fiber optics, and radio spectrum. Different links can transmit data at different rates. The link transmission rate is often called the link bandwidth, and is typically measured in bits/second.

● The topology of the Internet, i.e., the structure of the interconnection among the various pieces of the Internet, is loosely hierarchical. Roughly speaking, from bottom-to-top, the hierarchy consists of end systems connected to local Internet Service Providers (ISPs) though access networks. An access network may be a so-called local area network within a company or university, a dial telephone line with a modem, or a high-speed cable-based or phone-based access network. Local ISP’s are in turn connected to regional ISPs, which are in turn connected to national and international ISPs. The national and international ISPs are connected together at the highest tier in the hierarchy. New tiers and branches (i.e., new networks, and new networks of networks) can be added just as a new piece of Lego can be attached to an existing Lego construction. In the first half of 1996, approximately 40,000 new network addresses were added to the Internet [Network 1996] – an astounding growth rate.

● At the technical and developmental level, the Internet is made possible through creation, testing and implementation of Internet Standards. These standards are developed by the Internet Engineering Task Force (IETF). The IETF standards documents are called RFCs (request for comments). RFCs started out as general request for comments (hence the name) to resolve architecture problems which faced the precursor to the Internet. RFCs, though not formally standards, have evolved to the point where they are cited as such. RFCs tend to be quite technical and detailed. They define protocols such as TCP, IP, HTTP (for the Web) and SMTP (for open-standards e-mail). There are more than 2000 different RFC’s.

The public Internet (i.e., the global network of networks discussed above) is the network that one typically refers to as the Internet. There are also many private networks, such as certain corporate and government networks, whose hosts are not accessible from (i. e., they can not exchange messages with) hosts outside of that private network. These private networks are often referred to as intranets, as they often use the same “internet technology” (e.g., the same types of host, routers, links, protocols, and standards) as the public Internet.

The discussion above has identified many of the pieces that make up the Internet. Let’s now leave the nuts and bolts description and take a more abstract, service-oriented, view:

● The Internet allows distributed applications running on its end systems to exchange data with each other. These applications include remote login, file transfer, electronic mail, audio and video streaming, real-time audio and video conferencing, distributed games, the World Wide Web, and much much more [AT&T 1998]. It is worth emphasizing that the Web is not a separate network but rather just one of many distributed applications that use the communication services provided by the Internet. The Web could also run over a network besides the Internet. One reason that the Internet is the communication medium of choice for the Web, however, is that no other existing packet-switched network connects more than 43 million [Network 1999] computers together and has 100 million or so users [Almanac]. (By the way, determining the number of computers hooked up to the Internet is a very difficult task, as no one is responsible for maintaining a list of who’s connected. When a new network is added to the Internet, its administrators do not need to report which end systems are connected to that network. Similarly, an exiting network does not report its changes in connected end systems to any central authority.)

● The Internet provides two services to its distributed applications: a connection-oriented service and a connectionless service. Loosely speaking, connection-oriented service guarantees that data transmitted from a sender to a receiver will eventually be delivered to the receiver in-order and in its entirety. Connectionless service does not make any guarantees about eventual delivery. Typically, a distributed application makes use of one or the other of these two services and not both.

● Currently the Internet does not provide a service that makes promises about how long it will take to deliver the data from sender to receiver. And except for increasing your access bit rate to your Internet Service Provider (ISP), you currently cannot obtain better service (e.g., shorter delays) by paying more — a state of affairs that some (particularly Americans!) find odd.

We have given two descriptions of the Internet, one in terms of the hardware and software components that make up the Internet, the other in terms of the services it provides to distributed applications. But perhaps you are even more confused as to what the Internet is. What is packet switching, TCP/IP and connection-oriented service? What are routers? What kinds of communication links are present in the Internet? What is a distributed application? What does the Internet have to do with children’s toys? If you feel a bit overwhelmed by all of this now, don’t worry – the purpose of this book is to introduce you to both the nuts and bolts of the Internet, as well as the principles that govern how and why it works.

As every Internet researcher knows, some of the best and most accurate information about the Internet and its protocols is not in hard copy books, journals, or magazines. The best stuff about the Internet is in the Internet itself! Of course, there’s really too much material to sift through, and sometimes the gems are few and far between. Below, we list a few generally excellent WWW sites for network- and Internet-related material.

Internet Engineering Task Force (IETF): The IETF is an open international community concerned with the development and operation of the Internet and its architecture. The IETF was formally established by the Internet Architecture Board (IAB) in 1986. The IETF meets three times a year; much of its ongoing work is conducted via mailing lists by working groups. Typically, based upon previous IETF proceedings, working groups will convene at meetings of the IETF to discuss the work of the IETF working groups. The IETF is administered by the Internet Society, whose WWW site contains lots of high-quality, Internet-related material.

The World Wide Web Consortium (W3C): The W3C was founded in 1994 to develop common protocols for the evolution of the World Wide Web. This an outstanding site with fascinating information on emerging Web technologies, protocols and standards.

The Association for Computing Machinery (ACM) and the Institute of Electrical and Electronics Engineers (IEEE): These are the two main international professional societies that have technical conferences, magazines, and journals in the networking area. The ACM Special Interest Group in Data Communications (SIGCOMM), the IEEE Communications Society, and the IEEE Computer Society are the groups within these bodies whose efforts are most closely related to networking.

Connected: An Internet Encyclopedia: An attempt to take the Internet tradition of open, free protocol specifications, merge it with a 1990s Web presentation, and produce a readable and useful reference to the technical operation of the Internet. The site contains material on over 100 Internet topics.

Media History Project: You may be wondering how the Internet got started. Or you may wonder how electrical communications got started in the first place. And you may even wonder about what preceded electrical communications! Fortunately, the Web contains an abundance of excellent resources available on these subjects. This site promotes the study of media history from petroglyths to pixels. It covers the history of digital media, mass media, electrical media, print media, and even oral and scribal culture.

HTTP versus RTMP : Which Way to Go and Why

Penetration Testing On 802.11b Networks
For any query or issue, feel free to discuss on http://discuss.eduguru.in